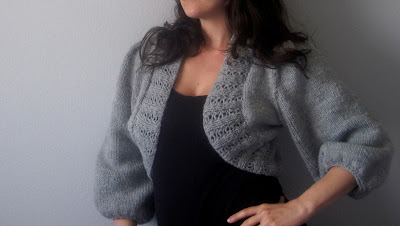 I just posted on raverly my finished Briar Rose Bolero by Ysolda Teague. It came out super cute and I love the style of it, except...it came out a little bit bigger than I wanted it to. Although in my defense, I have recently lost a cup size (bye bye breastfeeding), so I'm not too broken up about it.
It was a challenging knit, but I  loved it! You can check it out at http://www.ravelry.com/patterns/library/briar-rose-bolero to purchase and read up on how other knitters conquered this seamless shrug. 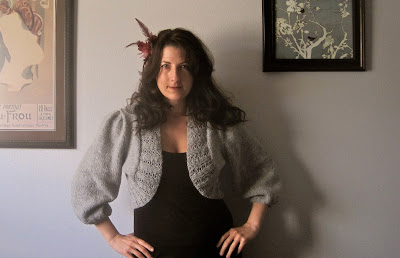 Posted by natalie at 3:28 PM No comments:

did someone say wool sweater?

Gotta love President Day Sales. Went to Joann’s and bought 5 skeins of Patons 100% new wool for $20. I’m so not kidding. So what does one do with so much bulky yarn you ask? Well, you get on raverly.com and peruse the hundreds of fun patterns to get inspired. In my case, I found Oatmeal Pullover by Jane Richmond and literally debated about whether or not to purchase it or just do my own version. I mean really, it’s a top-down raglan sweater, not the human genome project. But alas, my sheer laziness won out and I figured how can I not support a fellow designer. So off we go… 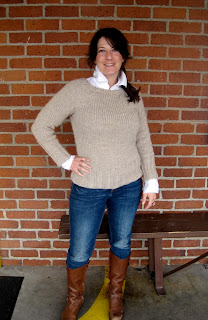 When I read the gauge that the pattern called for in US 10.5, I thought it was off, and sure enough, it was. By a lot. Unless you’re a REALLY loose knitter, you are not going to get that gauge. I did 3 gauge swatches before I casted on: US 10, US 11, and US 13. I settled on the US 11 - yeah, I’m a loose knitter.
Casted on late evening on February 19th, and by bedtime, I had already knitted 1 skein and finished all the raglan increases and connected the body. Talk about an incredibly fast knit. No joke. If I keep this up I might be done in less than two days. I have to say, so far this is the perfect 1st sweater project for someone hip & young who wants to knit something quickly for themselves and be proud to wear it (aka, all you hipsters out there).
Oh, and a PS about this yarn: It’s soft, lofty, yet holds together very nicely and doesn’t split while knitting as far as a roving yarn goes. I’m actually very surprised and super happy with it considering it was only $20. Score! 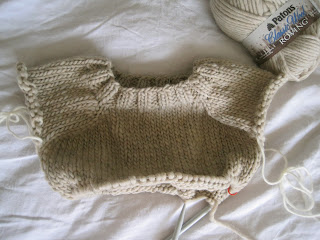 I did end up finishing the sweater last night. The only reason it took me longer than it should have to finish is 1) it’s been unseasonably warm in LA the past few weeks - it was 90 degrees on Sunday and who wants to knit heavy, chunky wool in that weather and 2) I’m notorious for knitting one sleeve and then not having the motivation to knit the second. Shame on me.
I made the following modifications:
On the body I knit about 7” from the underarm and began some body shaping by decreasing 4 stitches every other row for 4 rows and then increased back. As for the sleeves, after reading everyone’s comments on the arm area being tight, I picked up 14 stitches. I have lots of room. Next time I might pick up 12 stitches instead. We’ll see. I also lengthened the sleeves and added 8” of ribbing. 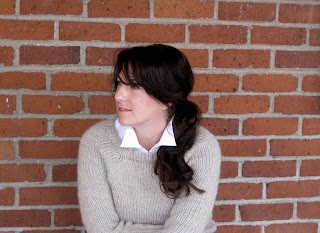 My only concern is the raglan increase. I’ve never increased a sweater the way the pattern called for. I understand why (so that it’s tight fitting), but it can look a little weird to a person who knows about knitting.
Overall, I really like this sweater. For the amount of time it does take to knit up it is awesome. Perfect first sweater project for sure ;)
Posted by natalie at 4:17 PM No comments:

Oh, and you can buy my patterns too!

Come see my Projects on Ravery!

natalie
Los Angeles, CA
A single mom to a beautiful baby girl who is the inspiration for my creative knits. You can email me directly at natalie@natandcallie.com.

As always, you can use any of my posted patterns as gifts or charity items and not for profit. Please, do not reproduce any content from this site without my written permission. Thank you.